Nevi or moles are common benign skin growths. Typically, they are either flat or slightly raised pigmented or skin colored lesions. Age, race, genetic and environmental factors (primarily sun exposure) all contribute to the development of nevi. They can develop anywhere on the body and usually appear within the early adult years. Most nevi are categorized by histologic subtypes such as the junctional, compound, or intradermal being the more common.

While most are considered benign, some nevi may be atypical or dysplastic and need to be distinguished from melanoma. Signs of worrisome atypia include Asymmetry, irregular Border, uneven or multiple Colors, large Diameter (>6 mm) and Evolution or changing. These features constitute the ABCDEs of melanoma. Regular self examinations are important. If such features are present, a focused skin evaluation is warranted and a biopsy may be necessary. Persons with many atypical moles or with a family history of melanoma are at a higher risk and need regular medical screening and evaluation.

Being born with large moles are called congenital nevi. On an infant, such moles are classified as large if they’re more than 2 inches (5 centimeters) in diameter. Even a large mole seldom becomes cancerous and almost never before the child reaches puberty.

This mole often looks like melanoma. It can so closely resemble melanoma that a dermatologist cannot tell by looking at it. That’s because this mole is often is pink, raised, and dome-shaped. It also can have different colors in it such as red, black, and brown. The mole may bleed and it can have an opening that oozes.

When a mole appears on the skin after a person is born, it is called an acquired mole. Most people who have light skin have about 10 to 40 of these moles. These moles also are called common moles.If a person has 50 or more of these moles, the person has a higher risk for getting melanoma.

The majority of skin lesions are benign and are commonly seen. Many can be safely observed while others may require treatment of surgical intervention. When a new lesion or mark appears on your skin it can be difficult to tell whether it is benign or malignant. If you have any suspicions or concerns about a mark, mole or lesion you should get it checked immediately. The following is a list of some commonly seen and treated benign lesions at Carolinas Skin Center.

Commonly seen and treated at CSC. 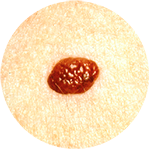 Cherry Angioma
Cherry angiomas or hemagiomas are acquired vascular lesions that occur in up to 50 percent of adults. The lesions tend to appear most often on the trunk and extremities and can be up to several millimeters in diameter. Some may grow to be larger or more noticeable. They are round, bright to dark red, nonblanching vascular papules Cherry angiomas first occur in early adulthood and increase in number with age. They are often asymptomatic but may cause local bleeding or irritation. Treatment options include laser treatment, electrodesiccation or excision of larger lesions. 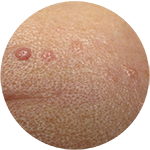 Sebaceous Hyperplasia (Senile Hyperplasia)
Sebaceous hyperplasia is common in middle-aged and elderly persons. Sebaceous hyperplasia consists of soft, yellow, dome-shaped papules, some of which are centrally dimpled. Commonly occurring on the forehead, cheeks, and nose, most lesions are 2 to 4 mm in diameter but may grow larger. The condition has no clinical significance but sometimes is confused with early basal cell carcinomas and needs to be carefully examined. Treatment options are generally conservative while biopsy may be necessary to exclude an underlying skin malignancy. 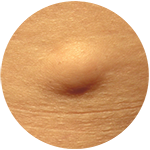 Lipoma
Lipomas are the most common subcutaneous soft tissue tumors with an estimated annual incidence of one per 1,000 person. Lipomas are collections of fat under the skin. They are soft, mobile tumors that usually stop growing when they reach a few centimeters in diameter. They tend to occur on the trunk, shoulders, posterior neck, axilla and extremities. They may be solitary or multiple and can cause local pain and tenderness. Treatment is usually surgical involving removing the fatty tumor in its entirety. 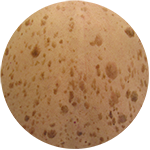 Seborrheic Keratosis
Seborrheic Keratosis, sometimes called senile wart, wisdom or age spot, is a non-cancerous condition that occurs as a light brown, black or tan growth on the surface of the skin. They often appear as thickened and raised or rough areas of skin with a “stuck on” waxy appearance. They range in size from 2 mm to 3 cm in diameter but may grow larger. The trunk is the most common site but these lesions can also be found on the extremities, face, and scalp. Although considered to be generally benign and harmless sometimes an underlying malignancy needs to be excluded. Treatment options for local irritation include superficial scraping or topical freezing. Surgical removal is rarely indicated. 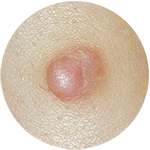 Dermatofibroma
Dermatofibromas are benign skin tumors that appears as a firm, round, brownish to red-purple growth or nodules usually found on the legs. They may result after minor skin trauma such as after shaving, insect bites or ruptured cysts. They often feel like hard lumps under the skin and tend to dimple and retract when squeezed. The nodules can be found anywhere on the body but most commonly appear on the anterior surface of the lower legs. They vary in size from 3 to 10 mm in diameter range in color from brown to purple, red, yellow, and pink. Local treatment, such as freezing or cryotherapy, may be used for smaller symptomatic lesions and excision for more troublesome ones. 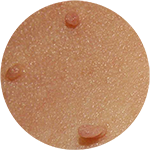 Acrochordon
Acrochordons or skin tags are soft skin growths where a narrow papule sticks out of the skin from a short piece of flesh resembling a tag. They are found in 25 percent of persons and increase in number with age. Obesity is a predisposing factor. The axilla, neck, and inguinal region are the most common sites. Skin tags usually are attached to a thin stalk and range in size from less than 1 mm to 1 cm in diameter and are skin-colored or brown. Treatment options include observation, cryotherapy or excision. 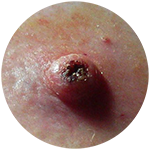 Keratoacanthoma
Keratoacanthomas are rapidly growing lesions that occur primarily on sun-exposed skin in older persons. The majority of lesions involve the face and upper extremities but also frequently occur on the lower extremities, especially in women. They begin as papular or raised lesions and characteristically enlarge quickly over two to four weeks to a size of 2 cm or more. After four to six months, the lesions usually shrink in size and disappear. The morphology and growth patterns of keratoacanthomas are usually diagnostic. However, biopsy and surgical treatment are recommended because of the clinical similarity to squamous cell carcinoma. 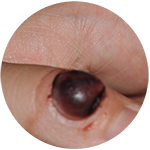 Pyogenic Granuloma
Pyogenic granulomas are vascular lesions appearing as solitary red or yellowish papules that are friable and bleed easily. Lesions most commonly occur on the head, neck, and extremities, especially the fingers, as well as on mucous membranes. Pyogenic granulomas frequently occur on the gingiva during pregnancy and may regress after childbirth. They begin as small growths, less than 1 cm, and may occur follow minor trauma or burns but most have no apparent cause. Treatment includes shaving and debulking, cauterization or excision. 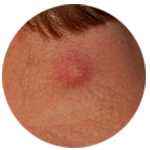 Epidermoid Cyst
Epidermoid cysts, also known as inclusion cysts and epidermal inclusion cysts, are round and mobile, ranging in size from a few millimeters to several centimeters. The cyst is filled with keratin and lined with stratified squamous epithelium. Epidermoid cysts commonly occur on the back, face, and chest, and communicate with the skin through a small, round, keratin-filled or pore. The cysts may remain small for years or may grow rapidly. Rupture of the cyst wall may initiate an inflammatory response or local skin reaction. The resulting pus can either drain from the surface or be slowly resorbed. Treatment options include observation, small incision and drainage or formal complete excision and repair. 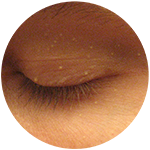 Milia
Milia are small, often asymptomatic, white or yellow papules that occur primarily on the faces of women and newborns. These cystic collections of keratin just under the epidermal surface and may appear as small bumps. Treatment is usually for cosmetic reasons and consists of incision and unroofing followed by expression of cystic contents. Topical skin treatments may also help to treat and prevent milia in affected persons.

The ABCDE of Melanoma

When should I seek medical assistance?

A good rule to follow is; seek medical advice for any new skin lesion that looks abnormal, one that has changed in appearance or size, seems to come and go or develops symptoms such as itchiness, flakiness, discoloration or bleeding.

If you have a personal history or a family history of skin cancers, especially melanoma or dysplastic/abnormal nevi or moles or have had significant sunburn or sun damage in the past, you should seek medical advice. Remember, many skin lesions do not in fact turn out to be skin cancers and can simply be left alone, but it is critically important to determine which ones are safe to leave and which need to be removed.